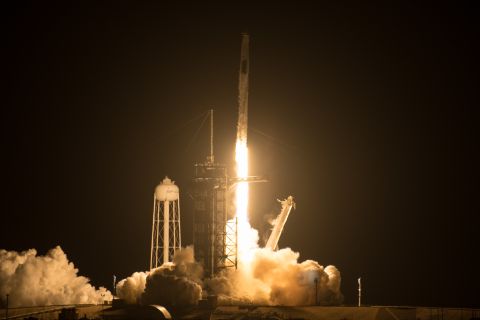 Private aerospace company SpaceX has finally launched the Crew-3 for the International Space Station. The Falcon 9 rocket carrying four astronauts took off from Kennedy Space Center. NASA had earlier delayed the launch due to poor weather conditions. Their mission was originally slated to launch on Halloween. Also, one of the astronauts had faced some minor medical issues just before the launch. The launch also marked the 600th person to visit space in six decades. The launch took place two days after Crew-2 astronauts were brought back from the ISS. All four Crew-2 astronauts stayed at the ISS for 200 days. The four would have been at the ISS to welcome the new four. However, NASA and SpaceX switched the order.

According to NASA, German astronaut Matthias Maurer has claimed the 600th position in the list of those flying to space. Apart from Matthias Maurer, the Crew-3 comprises three NASA astronauts. They are Kayla Barron, Tom Marshburn, and Raja Chari. NASA said that the surge in space tourists this year pushed the tally to go beyond the 600-mark. On average, 10 people visited space yearly for 60 years. The first person to fly around Earth was Yuri Gagarin. He was a Soviet cosmonaut. His flight in 1961 marked a new avenue to send humans around Earth. His flight lasted around 108 minutes. He returned to Earth after completing one full orbit in the Vostok spacecraft.

According to NASA, the Crew-3 astronauts will spend six months at the rotating laboratory. They will undertake science missions and conduct testing of new upgrades to the ISS’ Environmental Control and Life Support System. They will also conduct many additional experiments. NASA said that the astronauts will push the effort to test exploration risks in space and demonstrate technology for deep space exploration. This was the fourth flight of a Crew Dragon spaceship with astronauts and the third crew rotation mission. Overall, it was the fifth passenger flight for SpaceX. NASA has signed contracts with SpaceX and Boeing to ferry astronauts to the ISS which is in service for more than 20 years.