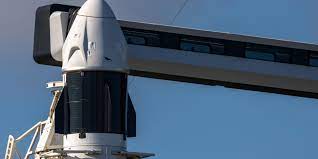 Astronauts take healthy and nutritious foods during space missions. Foods that they carry are lightweight. They must be kept for long periods so that astronauts can eat. Scientists are developing technologies that can address challenges faced by astronauts when it comes to food. According to SpaceX, the private aerospace company has made a breakthrough. The company said that the Dragon spacecraft will soon have capabilities that will allow astronauts to keep food warm. It has even promised that the spacecraft will have this facility when it flies next time. Dragon is a spacecraft that Elon Musk’s space firm has developed. It is a reusable spacecraft. The company has already launched the spacecraft to supply materials to the International Space Station.

The announcement came after the Inspiration4 crew said that they are eating cold pizza. Inspiration4 is a human spaceflight mission. It is also the first-ever all civilian mission. SpaceX launched the mission. The Dragon spacecraft with four all civilian crew was launched atop SpaceX’s launch vehicle Falcon 9 on September 16. The crew shared a checklist that they are enjoying while orbiting Earth. Eating cold pizza was one of the activities. They described eating pizza in space as extraordinary. Besides pizza, the list of meals includes beverages like tea and coffee, sandwiches, snacks, meatballs, and more.

However, this didn’t go down well with Elon Musk. Responding to the crew, he first offered an apology for the cold food. Musk then went on to promise that the spacecraft will get the capabilities to keep the food warmer so that the crew can enjoy warm pizza in Earth orbit. According to Musk, the spacecraft will also get a WiFi facility. Although the Inspiration4 crew members have kept the Earth updated about their space trip, a WiFi facility will give access to the Internet. SpaceX described the trip as historic. This will pave the way for broadening the avenue of space tourism. Inspiration4 is the first step by SpaceX towards its mission to colonize Mars.