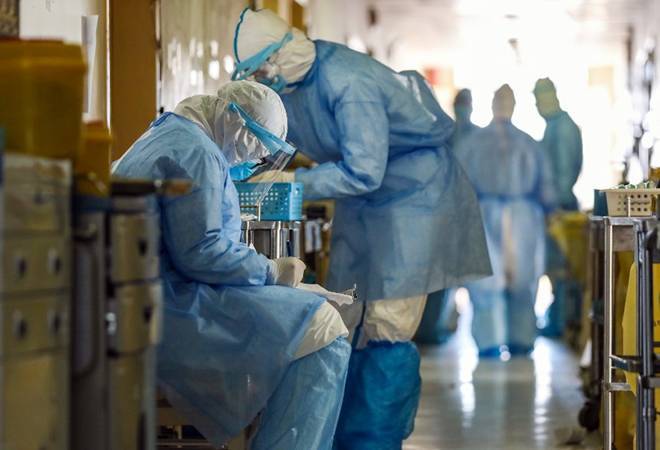 A staff member has been seen dressed as a smiling, red-nosed Christmas tree strolling through the emergency department of a San Jose hospital on Christmas, intending to bring some holiday cheer amid the COVID19 crisis. But, this move has led to another outbreak. Around 44 staff members from Kaiser’s San Jose emergency department have been diagnosed with COVID19 two days after the staff member has been seen strolling through the emergency department in Christmas tree costume. As per the report, one out of 44 infected health workers has died due to the disease. Hospital officials have said that the ‘air-powered’ Christmas costume might have caused the outbreak. All 44 positive cases have been reported from 27 December 2020 to 1 January 2021. Experts have said that the fan fitted inside the costume might have blown the virus-loaded droplets throughout the emergency department of the hospital. Senior Vice-President of the hospital, Irene Chavez has said that it is an unusual incident where a well-intentioned worker has done this act without prior notice. The hospital officials have not given the approval for such an act, said the VP. He has cleared the air stating that this incident is purely accidental, as the person doing the act has not shown any symptoms of the disease.

Hospital officials have announced that a registration clerk at the emergency department has died due to COVID19, who was among the staffers who have worked in the emergency department of the hospital on Christmas Day. After the death, the employees have tested positive for COVID19, said the officials. This outbreak has come at a time when the cases of COVID19 are surging in California and hospitals are struggling to stay afloat. As per the data, hospitalization in the state has increased by 7 percent since last week. Last week, a Southern California patient has tested positive for COVID19 for the second time. Experts have said that the patient has been infected with the more contagious variant of the virus, which has been identified in the UK for the first time. Santa Clara County, where the Kaiser’ San Jose medical Center is situated has reported more than 73600 cases. The county has seen nearly 747 deaths due to the pandemic so far. Around 700 people are hospitalized and nearly 160 patients have been admitted to the intensive care unit in Santa Clara County. As per the data, non-ICU beds are at 100 percent capacity and ICU beds are full up to 91 percent in the county.

Health experts have said that the new outbreak has taken place due to the battery-operated fan inside the Christmas costume of the staffer. It has kept on blowing air through the Christmas themed costume to keep it in the shape. The US Center for Disease Control and Prevention (CDC) has said that the fan might have passed the virus while the staffer has roamed around the emergency department because the virus can primarily spread through airborne transmission and respiratory droplets. The officials have said that even if the outbreak has not happened due to the Christmas costume, the spread of the virus has been through airborne transmission given the number of people infected. Hospital officials are investigating the outbreak. With the help of contact tracing, they have informed the staff members who might have been exposed to the virus. All staffers who have been working in the emergency department of the hospital are being tested for COVID19. The emergency department is undergoing a deep cleaning process. Health care workers, who have been diagnosed with COVID19, have been asked to stay at home and quarantine themselves. The vice president of the hospital has said that he will ensure all infected staffers get care and support from the hospital. The officials have banned air-powered costumes in Kaiser Permanente facilities. The unfortunate incident has forced the hospital to reinforce safety protocols among staff members such as physical distancing, no gathering in break rooms, no sharing foods and drinks, wearing masks all the time. Health experts have said that around 40000 health care workers at Kaiser Permanente facilities in Northern California have already received the first dose of the vaccine; it shows that even after vaccination it takes time to build immunity.