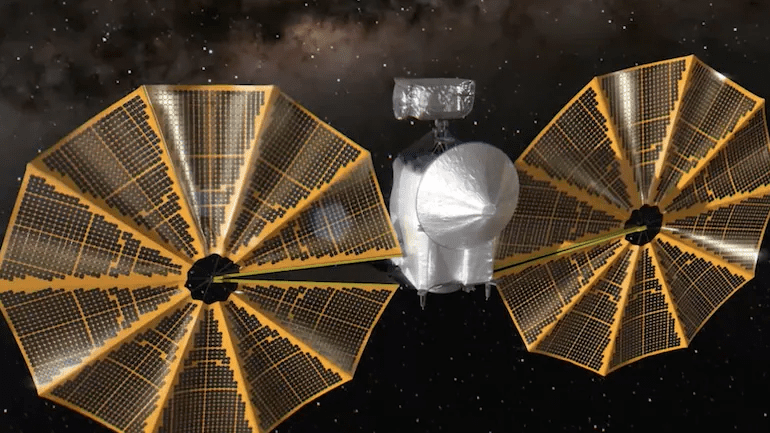 NASA’s Lucy research probe is almost ready for deployment on Oct. 16 from Florida’s Space Coast to start a 12-year trip through the solar system to explore 8 asteroids, a record amount for a single spaceship. The Lucy spacecraft was tested last month in a climate-controlled sterile environment at the Astrotech cargo processing plant in Titusville, Florida, just a few minutes from NASA’s Kennedy Space Center. The testing concluded a 2-month campaign at Astrotech following the arrival of the Lucy spacecraft from its Lockheed Martin facility in Colorado.

Technicians put hydrazine and nitrogen tetroxide rocket fuel into the spacecraft to power its small maneuvering thrusters and primary engine, which will assist Lucy in navigating to its asteroid targets. “Lucy is finished, and we’re ready for takeoff,” said Hal Levison, the mission’s chief investigator from Boulder, Colorado’s Southwest Research Institute, or SWRI. The USD 981 million tasks will be the first to investigate the Trojans, a group of asteroids that orbit the Sun both in front of and from behind Jupiter. According to scientists, the Trojan asteroids are a broad sampling of the sorts of tiny planetary building pieces left behind when the solar system originated 4.5 billion years ago.

From 2025 to 2033, Lucy will pass by 8 distinct asteroids, seven of which will be Trojan swarms. The Lucy spacecraft, weighing 3,300 pounds (1,500 kilograms), is scheduled to fly on an Atlas-5 rocket on Oct. 16 within a 75-minute window that begins at 5:34 a.m. EDT (0834 GMT). The project has 23 days to launch and take advantage of a rare conjunction of Earth with the asteroids located in the external area of our solar system. If a launch is not possible this year, NASA has a secondary plan to launch Lucy in October 2022, with no effect on the mission’s research aims.

However, the launch campaign in Florida went ahead without a hitch, and officials surmounted obstacles related to the COVID-19 pandemic to keep Lucy’s schedule on track. “The pandemic happened at an inconvenient moment,” said Arlin Bartels, Lucy’s deputy project leader at NASA’s Goddard Space Flight Center. “It happened just as the instrument teams were starting to fabricate and test their instruments.” “The spaceship contains almost 400 components.” At the time, we were still in the supply-chain phase. “In the best of conditions, planetary launch times are quite harsh because everything needs to come together on time,” Bartels added.

“Trying to accomplish that during a pandemic such as this is a frightening endeavor, and I’m not sure everybody thought we’d be able to see it through on time when the pandemic hit.” However, engineers completed the spacecraft’s assembly, mounted its three research instruments, finished building the probe’s fan-shaped solar panels, and put Lucy through a series of tests to guarantee it will survive the rigors of flight and interplanetary operations. “We’re not working on anything on the spaceship or the propulsion system that worries any of us right now,” stated Omar Baez, NASA’s Lucy mission launch director.

United Launch Alliance conducted a countdown rehearsal at Cape Canaveral last Friday. The test flight team filled kerosene, liquid hydrogen, as well as liquid oxygen rocket fuel into the Lucy mission’s Atlas-5 spacecraft, ensuring that the takeoff vehicle and floor processes are ready for the big countdown. “We got out of that test in fine form this Friday evening, so the carrier is ready to take the enclosed Lucy spacecraft,” Baez stated in a conversation with Spaceflight Now. “All right, we’re prepared to go.”

Technicians in the Astrotech payload processing center encased the Lucy spacecraft within the Atlas 5’s nose cover while ULA launched the Atlas-5 rocket last week. The aerodynamic fairing would shield the spacecraft during final pre-launch preparations and protect it throughout the initial few minutes of the spacecraft’s ascent into orbit. The emblem depicts the fossilized bones of a human ancestor named Lucy by the scientists who found her in Ethiopia in 1974. The asteroid expedition was named after the Lucy skeleton.

The Trojan asteroids might give insights into the solar system’s history, similar to how the fossil discoveries taught scientists about evolutionary history. Asteroids got stuck in swarms when Jupiter developed and stabilized into its current orbit, each centered on a gravitational pull stable libration point ahead of and behind the solar system’s largest planet. The fossil Lucy was named when scientists heard the Beatles’ song “Lucy in The Sky with Diamonds” while celebrating the finding. The link was discovered by scientists working on the Trojan asteroid explorer.

“That fossil revolutionized our knowledge of hominid evolution, just as we believe the Lucy spacecraft will revolutionize our knowledge of the solar system,” stated SWRI mission deputy principal investigator Cathy Olkin. In 2017, NASA chose the Lucy project, including another asteroid exploration mission called Psyche, for development. Psyche is set to launch next year to circle a metal-rich asteroid belt. Researchers believe the Trojan asteroids are remnants of the solar system’s early past when comparable tiny objects clustered together to produce the outer solar system’s gas as well as ice planets.