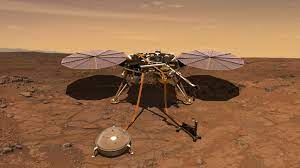 Quakes are common on Mars. According to NASA, it has just recorded a long quake on the planet. The magnitude of the quake reached 4.2. The agency said that the quake shook the Martian ground for more than 1.5 hours. The quake was recorded by InSight. InSight is a lander. NASA sent the lander to Mars to study the planet’s deep interior. It was launched in May 2018 and reached the planet in November same year. It landed at Elysium Planitia. NASA said that InSight felt good vibrations. The marsquakes were experienced by the lander on September 18. The magnitude was greater than the past quake when the lander had recorded a 3.7 magnitude vibration. Scientists expect that marsquakes will allow them to understand how the rocky worlds are formed.

NASA said that the site of the 4.2 magnitude quake was almost 8,500 km away from the lander’s current position. It was the farthest temblor that InSinght has observed since its arrival. Scientists are using the data to locate the epicenter of the marsquake. They are analyzing the waves. Waves change when they travel through the crust. Scientists expect that this will provide a way to peer deep. The lander had in August recorded two similar quakes. The quakes have some similarities despite having differences. The space agency said that both occurred when it was daytime on Mars. Besides, it was the windiest situation on the planet. The quake reported on September 18 had five times more energy than the previous record of 3.7 magnitudes in 2019.

NASA created Insight to explore the inner space of Mars. It deployed a seismometer soon after its arrival on the planet. The lander’s status is stationary. However, it has revealed a lot about the Red Planet and help in addressing mysteries surrounding the Earth’s neighbor. Earlier in 2020, the lander revealed a picture of an active underground. It helped in establishing that the Red Planet is seismically active. Data collected from the mission could provide crucial data about Mars’ interior. Mars has been the favorite destination for searching for life beyond Earth. The planet has shown signs that it once hosted Earth-like life. The US and China are the two only counties to send a robotic mission to Mars. NASA is planning to launch a crewed mission to Mars by end of the decade.