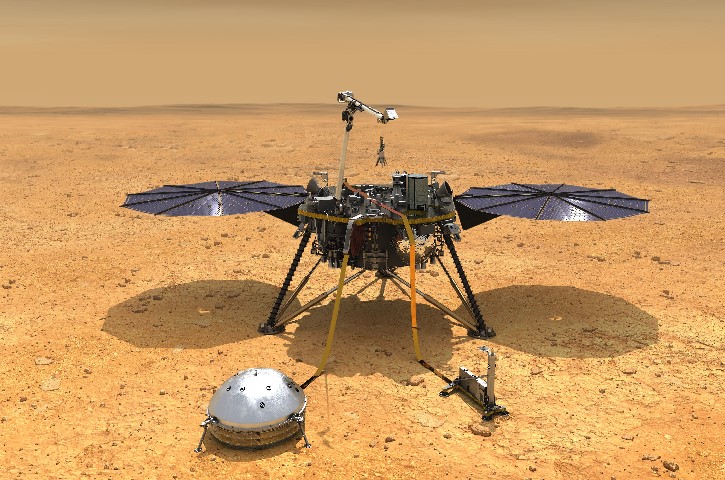 NASA’s InSights lander is roaming on Mars and is busy in digging the Martian surface. The Rover is digging the surface to put the temperature sensor in and calculate the temperature inside the Martian surface. The digging has been halted due to technical issues, but the lander is collecting a lot of information about the temperature of the planet and most importantly, seismic activities. NASA today announced that they’d received the readings from InSights lander about the seismic waves on Martian Surface. The lander has observed minor tremors, or Marsquakes said NASA.

Philippe Lognonné, a planetary seismologist at Paris Diderot University, manages the seismometer on the InSights lander. He said that the seismometer captured minor activity, which is not the marsquake but known as microseisms. This is a different phenomenon than Marsquakes. This is the first time scientists caught Microseisms on any other planet than the Earth. According to the report published in Science Magazine, the Microseisms observed on Mars are nothing but the activity caused by low-frequency pressure waves from atmospheric winds. Such microseisms are caused by big storms or hurricanes and not by the actual marsquake.

NASA scientists activated the seismometer on the InSight lander from one month and are still waiting to receive the seismic readings. With these readings, scientists were happy to see the seismic activity. With this activity reports, scientists are pretty sure about the health of the lander on Mars. With all of the instruments working correctly except the HP3 tool, scientists are receiving daily reports from the lander. The team at Jet Propulsion Laboratory has halted the major mars digging mission to insert the HP3 instrument due to the apparent difficulties. Phillippe Lognonne said that the team is expecting further readings from the lander as Martian quakes are pretty standard and they might observe one soon.