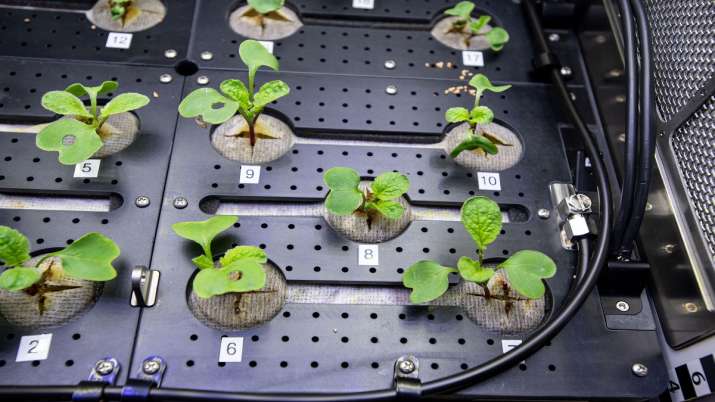 An astronaut from NASA, Kate Rubins has harvested radishes in space claiming that producing foods in microgravity is possible. The new development has opened new prospects for sustained long-term missions to the moon and Mars in the future. Astronomers have said that radishes have been harvested in the Advanced Planned Habitat (APH) onboard the International Space Station (ISS). The space agency from the US has released a time-lapse video showing how radishes have grown inside the APH over a period of 27 days. NASA astronaut Kate Rubins has grown around 20 radish plants in the APH. The astronaut has covered each plant in foil and kept it in cold storage. The officials from NASA have said that these plants will be transported down to Earth early next year via SpaceX’s 22nd Commercial Resupply Services Mission. Experts have said that these radishes are the latest kind of fresh produce, which have been successfully grown and harvested in microgravity.

These plants have been used for the Plant Habitat-02 (PH-02) experiment as experts understand this vegetable quite well and it grows within just 27 days. Scientists have said that radishes are a feasible test plant for a long-term space mission in the future, as they are quite nutritious and edible. NASA officials have said that this vegetable is quite similar to Arabidopsis, which is a tiny flowering plant linked to the cabbage family. Arabidopsis plants have been thoroughly studied by astronauts in microgravity. They have said that radishes are a little different kind of plant as compared to leafy greens, which have been grown by astronauts on the space station. NASA’s APH Program manager at Kennedy Space Center, Nicole Dufour has said that dwarf wheat has been the first crop, which has been harvested in the APH. He has said that harvesting a wide range of crops helps astronauts to identify, which crop flourishes in microgravity. It also assists scientists to understand which plant offers the best quality produce and nutritional balance to sustain long-term space missions.

With the PH-02 experiment, scientists have been able to study the ideal balance of care and feeding to harvest quality crops in space. As per the report, growing radishes have not required much maintenance by the crew. A precise quantity of minerals has been sufficient to harvest radish plants in space, said the experts. Scientists have said that the APH chamber requires red, blue, green, and broad-range white LED lights for the stimulated growth of the plants. A sophisticated control water system distributes water to plants as per the requirement. The APH has more than 180 sensors. These sensors help astronauts from NASA’s Kennedy Space Center to keep a check on plant growth and control the level of temperature, moisture, and carbon dioxide in the APH chamber. The lead researcher of the PH-02 test, Karl Hasanstein has said that due to their sensitive bulb-like formation, radish crop opens the door for great research possibilities. Hasanstein has been conducting plant experiments for NASA since 1995. Experts have been growing radish crops in the controlled plant habitat in the ISSES (International Space Station Environmental Simulator) chamber at Kennedy Space Center Processing Facility since the last month. Radishes grown at ISSES have been compared with radish crop harvested in space. Astronauts are going to harvest another round of radish seeds in the second science carrier of APH. It will help scientists to increase the sample quantity of radishes harvested in space to increase the accuracy of the experiment. The lead investigator of the experiment has said that the findings of the experiment will pave the way for sustained space crop production in the future.