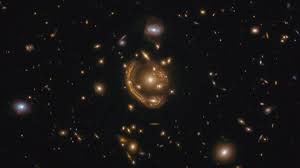 The Hubble Space Telescope had in December last year clicked an image of a Molten Ring. The image showed a narrow galaxy curved around. Scientists described it as a rare optical phenomenon. It was dubbed an Einstein ring. The molten Einstein ring has now pushed the need for new research. The photo showed a remote galaxy. The galaxy is highly magnified. It appears to be distorted because of gravitational effects. The said object has been identified as GAL-CLUS-022058s. It is located in Fornax. It is a constellation located in the southern celestial hemisphere. It is partly wrapped by Eridanus which is represented as a river. The object’s appearance results in the shining of the light from a faraway galaxy.

The effect was first coined in 1912 by Albert Einstein. This picture illustrates that the universe is a gigantic platform for vast illusions. Einstein realized this fact 100 years ago as he composed the law of general relativity. Astronomers measured the distance of the galaxy using the image of the Molten Ring. It is estimated to be 9.4 billion light-years away from Earth. It was formed when the universe was almost half of its today’s age. The universe was at that time going through a baby boom. It means that thousands of stars were being formed in the universe. Astronomers are able to get a glimpse of the past by magnifying the image of the galaxy.

Astronomers are now working to derive the galaxy’s physical properties. For this, they need to model the effects of lensing on the image. The detection of molecular gas gave astronomers a chance to measure the redshift. This gave confidence to astronomers that they are looking at a galaxy that is very distant. Astronomers also determined that the magnification factor of the galaxy is 20. The makes Hubble’s observing capability. The Hubble telescope allows scientists to see space better than any other telescope can. It is a cooperation between NASA and ESA. It was launched in 1990. It measures almost the size of a large school bus. The telescope weighs equal to two adult elephants. It travels around Earth and provided magnificent views of space.