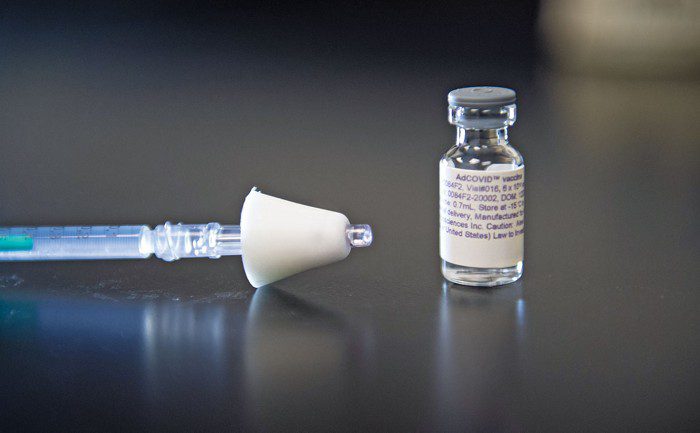 Scientists have been saying that a COVID19 vaccine that is injected under the skin might not be able to protect people’s upper respiratory tracts or nasal passages from an accumulation of the SARS-CoV-2 virus. Although, these COVID19 shots have been doing quite well in protecting the lungs from the dreaded virus. Health experts have said that to protect the upper respiratory tract, there is a need for a shot that is administered directly into the nose such as an intranasal vaccine. The SARS-CoV-2 virus infects human cells via the nasal passage. Some infections lead to no symptoms and in some cases, people suffer from mild to moderate symptoms of the disease. On the other hand, some people turn severe and meet with life-threatening consequences. Health experts have claimed that COVID19 shots that are administered under the skin have done an extraordinary job at preventing fatal COVID19 infections and deaths so far. However, these shots cannot offer the type of immunity in the upper respiratory tract that is required to prevent all kinds of infection, which is known as sterilizing immunity. Although there is no data to prove that the intranasal vaccine will be able to prevent all kinds of infection, but they might be better than the current vaccines that are being used around the world. Experts believe that the intranasal vaccine can protect mucus membranes of the nose and throat in a better way. A virologist at the Icahn School of Medicine from Mount Sinai Hospital, Florian Krammer has said that COVID19 shots that are currently available in the United States are able to induce high levels of antibodies after vaccination and some amount of antibodies might be found in the mucus membranes of the nose and throat as well. As the levels of antibodies start to wane away after months of inoculation, that initial nasal immunity as well begins to reduce.

At present, a renowned virologist Peter Palese has launched a trial to develop an intranasal COVID19 shot. He has finished the phase 1 trial in Mexico. Dr. Krammer has said that there is a lot of potential in the intranasal COVID19 shot. There are many experts who think that developing an intranasal vaccine might not be of high priority at this stage of the pandemic. They have said that at this time there is a need to contain the basic infection. In the future, this approach might help people, said the experts. Stanley Perlman has said that mucosal immunity might help, but these viruses are cold, even they though lead to pneumonia, people might never have sterilizing immunity. Stanley Perlman is a COVID19 expert at the University of Iowa. Experts have said that it is a fact that vaccines cannot prevent all infections but these shots cannot prevent people from spreading the virus. Kathryn Edwards, who is a vaccine expert, has revealed that she has said that years of experience with influenza shots that have been given by intramuscular injection has noted that the path of currently available flu vaccine delivery defends the lungs, but it does not protect the upper airways. These flu shots work in a better way but not always. A flu expert, who is the chief of influenza collaborating center of the World Health Organization (WHO) in Melbourne, Australia, Kanta Subbarao, has said that none of the existing COVID19 shots can offer strong immunity against the SARS-CoV-2 virus in the upper respiratory tract. Health experts have said that intranasal shots have many benefits. These vaccines do not need syringes; they will cut down the cost of vaccination. Intranasal shots will reduce the medical waste generated by an immunization program. An intranasal shot might not need a health care worker for administration. It will be easier to administer among children and those people who are dealing with needle phobia.

Health experts have said that there are many challenges in developing intranasal COVID19 shots. It is uncertain whether mRNA shots that have been playing a huge role in vaccination programs in the US can be modified as intranasal shots or not. Barney Graham who has led the group of scientists that has formulated the COVID19 vaccine from Moderna at the National Institute of Allergy and Infectious Diseases has said that developing an intranasal vaccine will require some novel innovations. He has said that a mucociliary blanket that overlaps the upper airways hinders the delivery of the vaccine into the respiratory tract. Krammer has said that an intranasal mRNA COVID19 shot is a thing of the future and it is the next-generation vaccine. At present, there are many intranasal shots that are in process in the United States. One of the studies on intranasal shot has been called off after a biotech company called Altimmune has seen disappointing results in the phase 1 trial. Experts have said that the vaccines that use an altered live virus to prompt an immune response in the nasal passage need to have a key balance. The vaccine needs to deliver sufficient antigen in the nasal passage to prompt an immune response. AstraZeneca as well is testing an intranasal shot in association with Oxford University. An animal study that has been done on an intranasal vaccine has revealed that hamsters that have been given the vaccine and then experimentally been infected with the SARS-CoV-2 virus have been found with less viral load in the nasal passage as compared to hamsters that have not been vaccinated. This vaccine candidate has been able to protect hamsters’ lungs as well, said the experts. The study has been led by Vincent Munster. He has said that if health experts are trying to contain the spread of the virus, an intranasal shot might be quite useful.