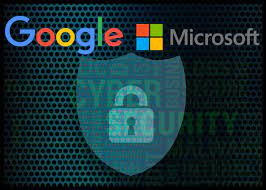 Home / Google, Microsoft To Invest USD 30 Billion Towards Cybersecurity Improvements Over Next 5 Years

Google, Microsoft To Invest USD 30 Billion Towards Cybersecurity Improvements Over Next 5 Years

In a bid to strengthen cybersecurity in the United States, several tech giants have joined hands and committed billions of dollars. Top executives of companies like Google and Microsoft are among those who recently met President Joe Biden at the White House. They discussed ways in which both government and private sector can work together to improve the cybersecurity of the country. The meeting comes in the backdrop of rising in the number of cases of cyber attacks. There have been several incidents of major cyberattacks against government agencies and private companies. The business leaders promised to provide necessary skills training to workers. This is important so that manpower can be arranged for unfilled cybersecurity jobs. This comes as the Biden administration has signed an executive order. The order makes it mandatory for US agencies to use two-factor authentication for logins. This can help prevent cyberattacks. After the meeting, Biden said the cooperation is important as most of the critical infrastructure is under the private sector. “Federal government is not capable of handling all this on its own and therefore it is important for us to come together,” he had said.

After the meeting, the White House said that Apple too will contribute to the fight against cyberattacks. The tech giant would work towards making multifactor authentication a regular affair. For this, it would make security improvements across its technology supply chain through a dedicated program. The company would also work with suppliers to train them about all security updates. Google has decided to dedicate over USD 10 billion to enhance cybersecurity. It would be spending the amount over the period of five years. During this, the search engine giant would also train over 100,000 citizens of the United States. The training would be provided in technical fields like IT support and data analytics. This would be done through the Career Certificate program of Google. The fund earmarked by the company would be used to strengthen open-source security and other software supply chain. Microsoft has also committed USD 20 billion for the cause. Microsoft CEO Satya Nadella said that the money would be used to deliver more advanced security tools. Nadella said in a tweet that the company would invest USD 150 million to help government agencies. The tech giant would work with the agencies to expand cybersecurity training partnerships. It is pertinent to mention that Microsoft has been spending USD 1 billion per year since 2015. JPMorgan Chase CEO Jamie Dimon said that the meeting at the White House was very productive. “I hope we will continue to collaborate in order to protect our country from such cyberattacks.”

IBM has said that it would train around 150,000 people in cybersecurity skills. The training will be provided over the period of three years. The company also said that it would also enter into partnerships with colleges and varsities. This will be helpful in diversifying the workforce. IMB has also announced a new data storage system for crucial infrastructure companies. The company is working to create a safe encryption method for quantum computing. Arvind Krishna, chief executive officer of IBM, had said ahead of the meeting that the issue of cybersecurity is more than a decade old. Krishna said that he is hopeful of seeing more cooperation. He said that IBM would continue to do its part to skilled workers in the space. Amazon Web Services said that it is planning to provide multifactor authentication devices. The devices will be provided to AWS account holders for free. This will help them better secure their online data. AWS is also planning to offer ‘security awareness training.’ The training program will be for both individuals as well as organizations.