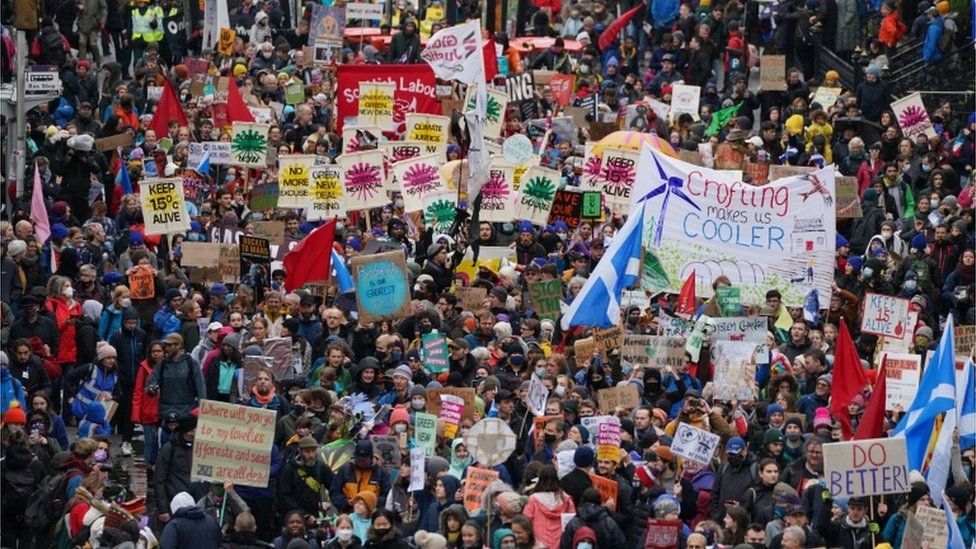 Climate Change Demonstrators in Glasgow Call-for-Action, But Offer No Solutions

On Friday and Saturday, scores of young individuals held placards, chanted, and played enticing samba drums outside of the United Nations Climate Change Conference, however, the message was rather confusing regarding how the world should go about averting catastrophic global warming. While numerous demonstrators expressed displeasure, if not outright anger, with government officials inside the Scottish Event Campus, plenty of others failed to articulate concrete policy recommendations they anticipated would materialize during the COP26.

Despite heavy rain and strong gusts of wind, nearly 100,000 demonstrators took part in the Global Day of Movement for Climate Justice protest on Saturday, which the BBC described as “one of the town’s greatest rallies in recent memory.” However, when questioned on both dates, what particular legislation they would want to see implemented to tackle climate change, most demonstrators hesitated to provide examples. They preferred to talk in general terms instead. “Seriously do something,” “Start paying attention,” as well as “not simply claim ‘We’re doing stuff but do nothing,” were among their responses.

When they did make specific recommendations, they all seemed to boil down to the conviction that market-based alternatives and proposals for a successful transition to renewable power should be substituted with urgent and extensive limits on fossil fuel production and industrial activity. “In Belgium, particularly, perhaps everywhere, there is already an emissions trading system, and I think that’s not at all a way to save the environment, to cut pollution, it doesn’t work,” stated “Lola Lanen, 25, a student at the University of Antwerp as well as the spokesperson for COMAC, the Workers’ Party of Belgium’s student movement.

The same message was heard during both weekend marches, including a Friday placard that stated, “Be bolder, think larger, no more fossil fuels.” “Students simply want to witness more of a difference than we are witnessing,” remarked Sophie Henderson, a 17-year-old high school student in Glasgow. “Our politicians have failed us terribly.” When pressed for a specific example of what the British government could do, she originally made general statements, highlighting, “They could listen to young individuals, and they have to be considerably more aggressive with the change that has to be done.”

When pushed further, she continued, “they should halt Cambo,” referencing a major new oil field in Scotland that the United Kingdom’s government is contemplating authorizing for additional development. The vilified politicians who are hammering out a deal inside the summit tend to dispute the concept of a complete halt to fossil fuel production.