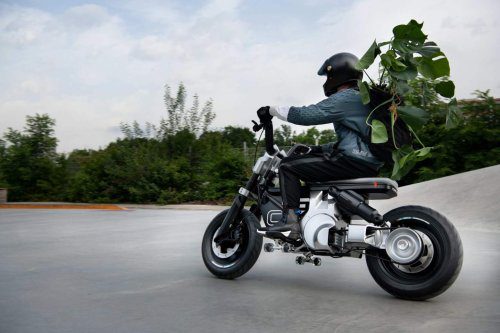 Electric bikes and scooters are gaining popularity around the world. The segment is certainly heating up and several companies are busy launching new designs to encash this opportunity. BMW’s Motorrad division is leaving no stone unturned to capture the market of electric bikes and scooters. The company has unveiled a new concept CE 02. This is neither a scooter nor a motorcycle. The machine is a segment-bending vehicle and looks a little bit like both. The concept has been launched with a focus on the youth. To be specific, the company is targeting those aged 16 and above. BMW feels that youngsters in this age group are open-minded enough to accept CE 02 as an alternative to other options of mobility.

The CE 02, which has borrowed some of the features that the company has been honing for its larger concept bikes like CE 04. The CE 04 is set to go into production. Talking about the looks, the design of CE 02 gives a feeling that it coming out of a sci-fi movie. Minimalist design clad in silver and black looks decent and the company said that it could be customized with stickers and other accessories. The weight of the mini-bike has been kept at just 264 pounds, keeping in mind the age group which will be riding it. The CE 02 packs 15 horsepower and can achieve the top speed of 56 mph or 90 kilometers per hour. Considering this size, this speed would be more than sufficient for users. The company has not shared any information regarding the battery capacity but claimed that it would cover the range of 90 kilometers or 56 miles on a full charge. This is identical to the top speed of CE 02.

The company said that it has been designed to make it an approachable machine. The company did manage to achieve it and the machine doesn’t look dorky, at all. The company thinks that it could a replacement for a skateboard or something like that. There are no pedals but it would have footrests, said BMW. However, in the photo, the only footrest that one can see is a skateboard clipped to the underside of the bike. It will have a circular LED headlight that will have enough light for the way. Just like the design, the display too has been kept simple. Placed between the handlebars, the display will provide basic information like speed and battery status. “Otherwise, the technology is very moderate,” said BMW. However, the company has not mentioned by when the production of CE 02 is expected to begin, or it will begin production at all. There are no dearth slick-looking such electric vehicles in the market. With BMW unveiling the new mini-bike, the competition is definitely going to be tougher. But with a sleek look and design, BMW could find some success if it begins production.