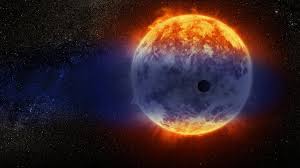 Home / Astronomers Detect a Planet That Is Vanishing at Record Speed

Astronomers Detect a Planet That Is Vanishing at Record Speed

It is not so common for interstellar planets and stars to evaporate and vanish into the infinity. Among a big number of 2869 exoplanets that have been discovered so far, only a few have this property. And, they are oft called Hot Neptunes. Now, in a surprising update, astronomers have found an exoplanet that is vanishing at record speed.

Gliese 3470 b is the name given for this newly-discovered exoplanet in the universe. What’s so interesting is that the planet is losing its atmosphere at a never-seen-before rate. The speeds are incomparable to what was seen before. This discovery also accounts for the reason why exoplanet hunting missions were not able to find many samples and obviously the whole concept of Hot Neptunes as such.

If this is a common behavior among exoplanets, there is no wonder that the universe does not see a huge amount of Hot Neptunes. Considering the rate of evaporation and vanishing, these planets will have become nothing or a mini-Neptune by the time a planet-hunting makes it to the end-point. It should be noted that the Kepler mission was able to discover a huge number of mini-Neptunes in various instances.

As said earlier, scientists have found evaporating planets before but Gliese 3470 b is a lot different. When it is compared to the last vanishing that was found, the speeds are 100x than the normal. It means that the new exoplanet is going to be nothing in a shorter period of time. Of course, this happens because the planets are situated really close to the host star.

The name Neptune is given to these planets because they resemble the same size and structure. However, the proximity towards the host star makes them really hot, which is the reason for rapid evaporation of the content in the atmosphere.