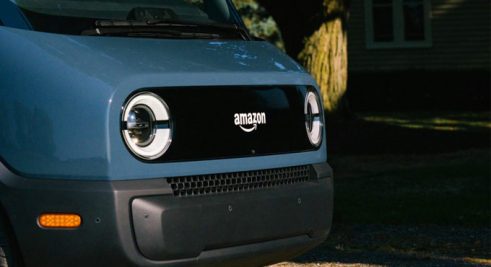 Amazon has revealed its customized fully electric delivery trucks that will be soon part of its fleet. These trucks have been developed in partnership with Rivian, an electric transport startup. The company is hopeful of having 10,000 such trucks in service by 2022. The e-commerce giant has set the target of inducting 100,000 electric trucks for delivery purchases in the next ten years. This is part of Amazon’s commitment to being carbon neutral by 2040 under it Climate Pledge. According to a blog post of Amazon, the new delivery truck is an innovative design that is much more than an electric motor and a battery.

There is a long list of features that the company claims it will get from the all-electric delivery vehicle in comparison to the traditional delivery van. The new delivery truck will have state-of-the-art sensor detection and a large windshield to enhance the visibility of drivers. The vehicle will have exterior cameras that can provide 360 degrees view of the outside vehicles. Alexa will be integrated within the vehicle to provide hands-free latest weather updates and access to route information. For the driver’s safety and protection, there will be a strengthened door. Some additional features will include bright tail lights at the rear of the vehicle, three levels of shelving for better protection while on the road.

Amazon said it wanted drivers to love what is they are driving and customers should also feel excited. Amazon is doing enough on its part by taking Climate Pledge but others too need to participate in this. This is because no changes will be visible unless the world finds a way to reduce global emission by 50 percent no later than the end of 2030. The partnership with Rivian will help achieve Amazon the target of its Climate Pledge. Amazon had placed the order for electric vehicles from Rivian just months after it funded the EV startup. Meanwhile, the company has ordered an additional fleet of vehicles from Mercedes.