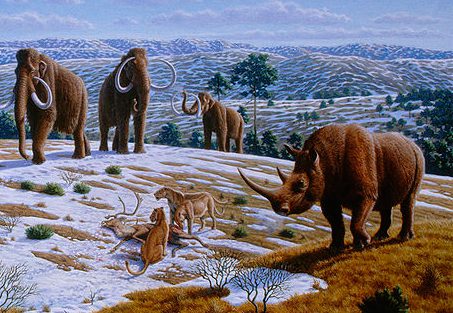 A new study has found that mass extinction of land-dwelling animals such as amphibians, reptiles, mammals, and birds occurs in a cycle of around 27 million years. The findings of the new study coincide with the mass extermination of ocean life, which has been reported in the past. Experts have said that the mass extinction of land-dwelling animals is happening due to massive asteroid effects and destructive volcanic outburst of lava, which is known as flood basalt eruptions. The flood basalt eruptions have been the major cause of this mass extinction, said the experts. The lead author of the study and a professor at New York University’s Department of Biology, Michael Rampino has said that body of effects and the throbs of earth’s internal activities, which lead to flood basalt volcano might be stirring at the same drumbeat of 27 million years cycle. The findings of the new study have been released in the journal called Historical Biology.

Around 66 million years ago, around 70 percent of all creatures on land and in the oceans including dinosaurs had been extinct during the destructive crash of a large asteroid into the earth. Paleontologists found that there have been around 90 percent of the mass extinction of marine life. Experts who have been involved in the new study have said that such events do not occur randomly rather they repeat themselves every 27 million years. The lead author of the study and co-authors of the Carnegie Institution for Science has looked at the data of mass extinction of land-dwelling creatures in the study. They have found that the mass extinction of these animals has coincided with the extinction of marine life. They have done new statistical analyses of the extinction of land creatures. They have found that these events as well have followed the same cycle of 27.5 million years. Experts have said that extinctions of land animals and marine life are not the only incidents that follow a cycle, collision of large comets with the earth pursue a cycle, which is aligned with the extinction cycle.

Astrophysicists have said that periodic asteroid shower takes place in the solar system every 26 to 30 million years. It produces cyclical effects and leads to episodic mass extinctions as well. As per the experts, the sun and other planets rotate through the crowded mid-plane of the Milky Way Galaxy every 30 million years. Scientists have said that during this time, comet showers are likely to happen, which leaves a massive impact on the earth. These impacts are so massive that it can destroy the entire land and marine life. It can lead to extensive disruption of dark and cold matter, wildfires, ozone depletion, and acid rain. The lead author of the study has said that coincidental findings of the study lend its credibility to the theory of periodic global catastrophic events as factors for mass extinctions. He has said that three of the major extinctions of species on land and in the oceans have happened at the same times as the three massive impacts in the last 250 million years. Each massive impact has been capable of leading to a global disaster and mass extinction. Experts have now been able to find another possible reason for mass extinction beyond asteroids. All eights of corresponding mass extinctions on the land in the oceans have happened along with flood basalt eruptions. As per the scientists, these disruptions might have caused severe conditions for life. They would have led to brief periods of intense cold, ozone disruptions, acid rain, and a high level of radiation. They have said that long term of these disruptions will result in lethal greenhouse heating and a higher level of acid, and a low level of oxygen in the oceans. The lead author has said that global mass extermination might have been due to the large-scale cataclysmic effects and massive volcanic eruptions.