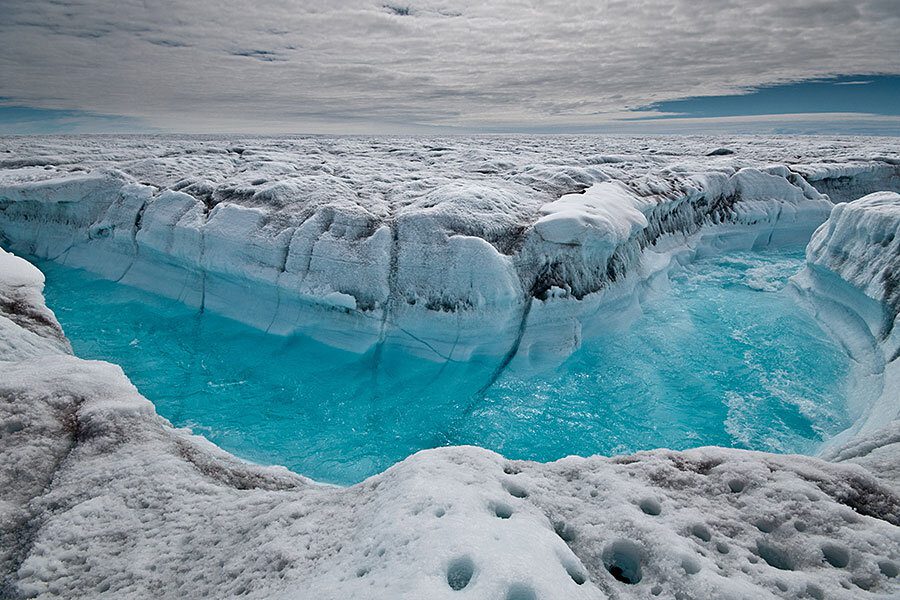 Research on Greenland’s ice sheets has shown that glaciers retreated in around every sector of the island, at the same time; these glaciers are going through physical changes. Experts have said that some physical changes are leading to the deflection of freshwater rivers under the ice sheets. The study has been led by Twila Moon from the National Snow and Ice Data Center. Scientists have taken a close look at the physical changes in 225 of Greenland’s glaciers, which end in the Atlantic Ocean. These glaciers are thin fingers of ice, which flow from the ice sheets to the Ocean. Scientists have seen that none of these glaciers has significantly grown since the year 2000. Nearly 200 of them have already retreated. Experts have come up with a map, which shows the size of ice velocity across Greenland calculated by satellites. They have collected data via the Inter-Mission Time Series of Land Ice Velocity and Elevation project (ITS_LIVE). This data shows the observation of glaciers compiled by many Landsat satellites from 1985 to 2015 into a single dataset, which is available for scientists and the public as well.
Scientists have revealed that a sheet of ice, which is known as Continental glacier, covers 80 percent of Greenland. It goes down to be of up to 3-kilometer thickness. As glaciers flow towards the Ocean, it is stocked up by a new snowfall in the center of the ice sheet, which is condensed into ice. Many studies have revealed that the balance between glacier melting and stocked up is going through a change and the rate of iceberg calving as well is changing. Experts have said that the ice sheet is losing mass at a higher speed and extra meltwater is going into the Ocean due to increasing air and ocean temperatures. The co-author of the study and a snow and ice scientist at NASA’s Jet Propulsion Lab, Alex Gardner has said that the coastal atmosphere in Greenland is going through a key transformation. The author has said that they have seen new sections of the Ocean and inlets are opening up as ice sheets are retreating. They have found evidence of changes in the freshwater flows as well. Experts have said that melting ice will not just increase the sea level but it will reform Greenland’s coastline as well, which will change the coastline ecology.
The findings of Twila Moon, Gardner, and their teammates are consistent with other observations of Greenland. However, a new survey has found a trend, which is evident in other studies. The survey has shown that as glaciers move away, they are being altered in a way, which is likely to reroute the flow of freshwater rivers under the ice. Experts have said that as warm air liquefies ice off their surfaces and leads to change in their flow, glaciers change in thickness. Both situations can result in changes in the allocation of pressure under the ice. It can change the path of subglacial rivers, as water takes the route of lowest pressure, said the experts. Considering previous studies on the ecology of Greenland, scientists have said that freshwater rivers under the ice send nutrients to bays, deltas, and inlets across Greenland. The subglacial rivers enter the ocean where the ice and bedrock are located, which is often deep inside the Ocean’s surface. Nutrient-rich freshwater rises to the surface, where nutrients can be taken by phytoplankton. Phytoplankton acts as a foundation of the marine food chain. The study has shown that glacial meltwater rivers directly impact the efficiency of phytoplankton. Scientists have said that the opening of new sections in the Ocean and new fjords as glaciers and ice shelves retreat can lead to significant changes in the local atmosphere.