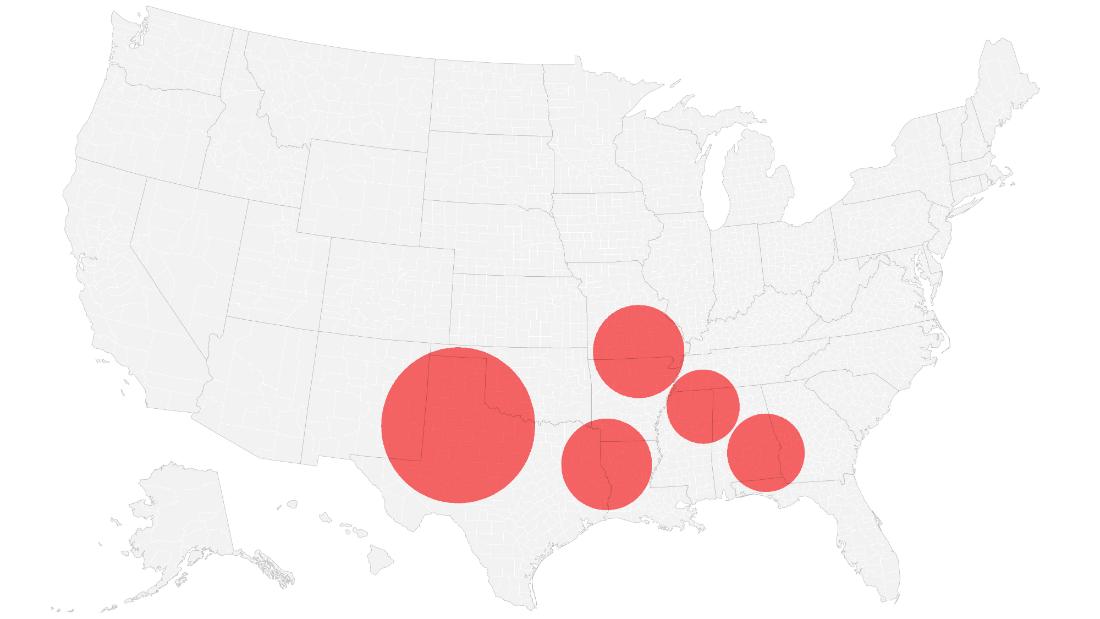 A new analysis that has been done by experts from Georgetown University has shown that around five clusters with a low rate of vaccination might contribute to health risks for the US in the future. Experts have said that these low-vaccinated clusters might be responsible for spreading new variants of coronavirus in the country. These clusters include two areas in Texas as well. Health experts have said that there are areas with concentrations of unvaccinated people who are in the age range of 12 years and older in Texas’s western Panhandle and eastern Piney Woods regions that are a huge cause of concern at present. Experts from Georgetown University have been tracking the rate of vaccination across the country since December 2020. They have found that there are around 30 low vaccinated clusters in the US at present. These clusters have a much lower rate of vaccination as compared to the national average that is 47.8 percent. Five clusters that have been identified by experts are scattered across eight states and these clusters are prevalent in the southeastern region of the US. These five clusters are in neighborhoods of Alabama, Arkansas, Louisiana, Oklahoma, Texas, Mississippi, Georgia, and Tennessee. An associate professor of Biology at Georgetown University, Shweta Bansal, who has been leading the project, has said that the two clusters in Texas cover nearly 141 counties out of 254 counties. She has claimed that though it is a major portion of the state, these clusters do not consist of many of the high-density cities that have been doing great in terms of the rate of vaccination.

Dr. Bansal has said that the overall rate of vaccination in Texas does not show the exact picture of the level of danger. The state appears to be in a good place as the latest figures show that nearly 50.4 percent of people who are in the age range of 12 years and above that are around 12 million people have been fully vaccinated against COVID19. The data from the Texas Department of State Health Services has shown that nearly 58 percent of people have been given at least one dose of the COVID19 shot. However, the new study from Georgetown University has revealed some disturbing concerns. The authors of the analysis have said that nearly all COVID19 related deaths have occurred among people who have not been inoculated. The authors have said that low-vaccinated clusters will put the country at greater risk as each interaction with an unvaccinated person can lead to a new spread of the SARS-CoV-2 virus. With every new case of COVID19, the chances of new variants coming up shoots up said the experts. The Delta variant that is said to be the most contagious and deadly strain has been identified in almost all new cases of COVID19 in the US. The Delta variant has emerged in India for the first time when the country has been reeling through the second wave of the pandemic. The lead author of the study has said that it is not the time to let our guard down.

Health experts have said that many other variants have emerged and are resistant to COVID19 shots. These variants might take us back in the time of 2020 and they will pose a great threat to even those who are fully vaccinated. The authors of the new study have noted that some counties have been doing better than others such as Harris County, which has a 42.5 percent vaccination rate while Dallas county has only a 41.2 percent rate of vaccination as of now. In other counties, especially those situated in one of the clusters the rate of vaccination hovers in low numbers only. Health experts have said that authorities need to decide if they are fine with having two Americas or Texases with a line between vaccinated and unvaccinated counties. If it is a case, then interactions are going to continue and they will continue to be a threat to public health. The authors of the study have said that the untraced spread of the virus in the state would soon reach nationwide. A virology professor from Texas A & M University, Dr. Ben Neuman has said that the US is not going to be a safer place until these low vaccinated clusters are vaccinated enough to reach up to the national average. Dr. Neuman has said that these unvaccinated clusters will give access to the virus to grow and flourish further. He has said that new variants that might emerge from these areas are going to become a huge matter of concern for the rest of the country. Later, the entire world will have to deal with them. Health authorities have initiated many outreach campaigns to eradicate vaccine hesitancy among people. Vaccine hesitancy continues to prevail in Texas, said the experts. A survey that has been done by the University of Texas has shown that 1 in 5 unvaccinated people in Texas have been resisting making an appointment to take the shot so far. Many people have said that they have been scared of the potential side effects of the shot. Experts who have not been involved in the study have said that the Georgetown study has pointed out some good concerns that will help public health officials in reaching out to larger masses. When health authorities will have a clear picture of unvaccinated clusters, they will be able to target them specifically with outreach efforts.